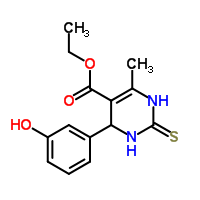 Aneuploidy may result from abnormalities in the biochemical pathways and cellular organelles associated with chromosome segregation. Monastrol is a reversible, cell-permeable, non-tubulin interacting inhibitor of the mitotic kinesin Eg5 motor protein which is required for assembling and maintaining the mitotic spindle. Monastrol can also impair centrosome separation and induce monoastral spindles in mammalian somatic cells. The ability of monastrol to alter kinesin Eg5 and centrosome activities and spindle geometry may lead to abnormal chromosome segregation. Mouse oocytes were exposed to 0 (control), 15, 30, and 45 microg/ml monastrol in vitro for 6 h during meiosis I and subsequently cultured for 17 h in monastrol-free media prior to cytogenetic analysis of metaphase II oocytes. A subset of oocytes was cultured for 5 h prior to processing cells for meiotic I spindle analysis. Monastrol retarded oocyte maturation by significantly (P < 0.05) decreasing germinal vesicle breakdown and increasing the frequencies of arrested metaphase I oocytes. Also, significant (P < 0.05) increases in the frequencies of monoastral spindles and chromosome displacement from the metaphase plate were found in oocytes during meiosis I. In metaphase II oocytes, monastrol significantly (P < 0.05) increased the frequencies of premature centromere separation and aneuploidy. These findings suggest that abnormal meiotic spindle geometry predisposes oocytes to aneuploidy.

Monastrol is a small, cell-permeable molecule that arrests cells in mitosis by specifically inhibiting Eg5, a member of the Kinesin-5 family. We have used steady-state and presteady-state kinetics as well as equilibrium binding approaches to define the mechanistic basis of S-monastrol inhibition of monomeric human Eg5/KSP. In the absence of microtubules (Mts), the basal ATPase activity is inhibited through slowed product release. In the presence of microtubules, the ATPase activity is also reduced with weakened binding of Eg5 to microtubules during steady-state ATP turnover. Monastrol-treated Eg5 also shows a decreased relative affinity for microtubules under equilibrium conditions. The Mt•Eg5 presteady-state kinetics of ATP binding and the subsequent ATP-dependent isomerization are unaffected during the first ATP turnover. However, monastrol appears to stabilize a conformation that allows for reversals at the ATP hydrolysis step. Monastrol promotes a dramatic decrease in the observed rate of Eg5 association with microtubules, and ADP release is slowed without trapping the Mt•Eg5•ADP intermediate. We propose that S-monastrol binding to Eg5 induces a stable conformational change in the motor domain that favors ATP re-synthesis after ATP hydrolysis. The aberrant interactions with the microtubule and the reversals at the ATP hydrolysis step alter the ability of Eg5 to generate force, thereby yielding a nonproductive Mt•Eg5 complex that cannot establish or maintain the bipolar spindle.

Monastrol is a small molecule that inhibits a mitotic kinesin called Eg5. In cells, monastrol dramatically arrests mitosis with a defect in the engagement and relative sliding of the two half-spindles [1. and 2.]. We show here that monastrol stabilises a remarkable low-friction attached mode of Eg5 that binds stably to microtubules, yet can be readily slid along them. We will suggest that this mode is part of the normal Eg5 kinetic cycle (‘on-pathway’), with significant consequences for the in vivo role of Eg5 and for the interpretation of experiments involving monastrol.

Terminally postmitotic neurons continue to express many of the kinesin-related proteins known to configure microtubules during mitosis. Drugs that inhibit these kinesins are being developed as anti-cancer agents with the hope that they will inhibit proliferation of tumor cells without having adverse effects on the nervous system. The prototype, termed monastrol, inhibits the kinesin known as Eg5, which is essential for maintaining separation of the half-spindles. Eg5 is also highly expressed in neurons, particularly during development. Exposure of cultured sympathetic neurons to monastrol for a few hours increased both the number and the growth rate of the axons. With additional time, the overall lengths of the axons were indistinguishable from controls. Sensory neurons showed a similar short-term increase in axonal growth rate. However, prolonged exposure resulted in shorter axons, suggesting that sensory neurons may be more sensitive to toxic effects of the drug. Nevertheless, the overall health of the cultures was still far more robust than cultures treated with taxol, a drug commonly used for anti-cancer therapy. On the basis of these results, we conclude that Eg5 normally generates forces that oppose axonal growth, presumably by partially suppressing the forward advance of microtubules. We speculate that local regulation of Eg5 could be a means by which neurons coordinate rapid bursts of axonal growth with appropriate environmental cues. The comparatively modest toxic effects on the neurons over time are a hopeful sign for clinicians interested in using anti-Eg5 drugs for cancer therapy.

Small molecules that perturb specific protein functions are valuable tools for dissecting complex processes in mammalian cells. A combination of two phenotype-based screens, one based on a specific posttranslational modification, the other visualizing microtubules and chromatin, was used to identify compounds that affect mitosis. One compound, here named monastrol, arrested mammalian cells in mitosis with monopolar spindles. In vitro, monastrol specifically inhibited the motility of the mitotic kinesin Eg5, a motor protein required for spindle bipolarity. All previously known small molecules that specifically affect the mitotic machinery target tubulin. Monastrol will therefore be a particularly useful tool for studying mitotic mechanisms.

Monastrol, a cell-permeable small molecule inhibitor of the mitotic kinesin, Eg5, arrests cells in mitosis with monoastral spindles. Here, we use monastrol to probe mitotic mechanisms. We find that monastrol does not inhibit progression through S and G2 phases of the cell cycle or centrosome duplication. The mitotic arrest due to monastrol is also rapidly reversible. Chromosomes in monastrol-treated cells frequently have both sister kinetochores attached to microtubules extending to the center of the monoaster (syntelic orientation). Mitotic arrest–deficient protein 2 (Mad2) localizes to a subset of kinetochores, suggesting the activation of the spindle assembly checkpoint in these cells. Mad2 localizes to some kinetochores that have attached microtubules in monastrol-treated cells, indicating that kinetochore microtubule attachment alone may not satisfy the spindle assembly checkpoint. Monastrol also inhibits bipolar spindle formation in Xenopus egg extracts. However, it does not prevent the targeting of Eg5 to the monoastral spindles that form. Imaging bipolar spindles disassembling in the presence of monastrol allowed direct observations of outward directed forces in the spindle, orthogonal to the pole-to-pole axis. Monastrol is thus a useful tool to study mitotic processes, detection and correction of chromosome malorientation, and contributions of Eg5 to spindle assembly and maintenance.

Various factors including some motor proteins regulate microtubule (MT) transport and influence the formation of neuronal processes. Eg5, a slow and non-processive (+)-end directed motor molecule, is expressed in developing and differentiated neurons. However, how Eg5 works in neurons is still elusive. Thus, we treated primary rat cortical neuron cultures with monastrol, a specific inhibitor of Eg5, to investigate its role in neurons. Immature neurons treated with monastrol extended longer processes than control within a few hours. After 3 days, immature neurons treated with monastrol had longer dendrites but slightly shorter axons than control. This difference in growth between dendrites and axons became more prominent as the cells differentiated until 5 days. Interestingly, MT distributions in the cell bodies of monastrol-treated neurons appeared somewhat circular surrounding the nucleus, while MTs in the cell bodies of control neurons were primarily distributed in the MT organizing center (MTOC) just beside the nucleus. In mature neurons, monastrol treatment induced the axonal clusters of tubulins, grossly not affecting dendrites. Taken together, we conclude that Eg5 acts distinctively on dendrites and axons in neurons and suggest a putative model of how Eg5 works distinctively on dendrites and axons.

The kinesin-related protein HsEg5 plays essential roles in mitotic spindle dynamics. Although inhibition of HsEg5 has been suggested as an aid in cancer treatment, the effects of such inhibition on human cells have not been characterized. Here we studied the effects of monastrol, an allosteric HsEg5 inhibitor, on AGS and HT29 cell lines and compared them to those of taxol. While both cell lines were similarly sensitive to taxol, AGS cells were more sensitive to monastrol. The differences in sensitivity were determined by the degree of inhibitory effect on cell proliferation, reversibility of monastrol-induced G2/M arrest, intracellular phenotypes and induction of apoptosis. In both cell lines, monastrol-induced apoptosis was accompanied by mitochondrial membrane depolarization and poly-ADP-ribose polymerase 1 cleavage. In AGS, but not HT29 cells, monastrol-induced apoptosis involved a prominent cleavage of procaspases 8 and 3. While in AGS cells, monastrol induced the formation of symmetric microtubule asters only, in HT29 cells, asymmetric asters were also formed, which may be related to specific HsEg5 functions in HT29 cells.

Kinesin motor proteins utilize the energy from ATP hydrolysis to transport cellular cargo along microtubules. Kinesins that play essential roles in the mechanics of mitosis are attractive targets for novel antimitotic cancer therapies. Monastrol, a cell-permeable inhibitor that specifically inhibits the kinesin Eg5, the Xenopus laevis homologue of human KSP, can cause mitotic arrest and monopolar spindle formation. In this study, we show that the extent of monastrol inhibition of KSP microtubule-stimulated ATP hydrolysis is highly dependent upon ionic strength. Detailed kinetic analysis of KSP inhibition by monastrol in the presence and absence of microtubules suggests that monastrol binds to the KSP-ADP complex, forming a KSP-ADP-monastrol ternary complex, which cannot bind to microtubules productively and cannot undergo further ATP-driven conformational changes.

Monastrol is a small molecule inhibitor that is specific for Eg5, a member of the kinesin 5 family of mitotic motors. Crystallographic models of Eg5 in the presence and absence of monastrol revealed that drug binding produces a variety of structural changes in the motor, including in loop L5 and the neck linker. What is not clear from static crystallographic models, however, is the sequence of structural changes produced by drug binding. Furthermore, because crystallographic structures can be influenced by the packing forces in the crystal, it also remains unclear whether these druginduced changes occur in solution, at physiologically active concentrations of monastrol or of other drugs that target this site. We have addressed these issues by using a series of spectroscopic probes to monitor the structural consequences of drug binding. Our results demonstrated that the crystallographic model of an Eg5-ADP-monastrol ternary complex is consistent with several solution-based spectroscopic probes. Furthermore, the kinetics of these spectroscopic signal changes allowed us to determine the temporal sequence of drug-induced structural transitions. These results suggested that L5 may be an element in the pathway that links the state of the nucleotide-binding site to the neck linker in kinesin motors.

Taxanes are powerful chemotherapy agents that target the microtubule cytoskeleton, leading to mitotic arrest and cell death; however, their clinical efficacy has been hampered due to the development of drug resistance. Therefore, other proteins involved in spindle assembly are being examined as potential targets for anticancer therapy. The mitotic kinesin, Eg5 is critical for proper spindle assembly; as such, inhibition of Eg5 leads to mitotic arrest making it a potential anticancer target. We wanted to validate Eg5 as a therapeutic target and determine if Eg5 inhibitors retain activity in Taxol-resistant cells. Using affinity chromatography we first show that the compound HR22C16 is an Eg5 inhibitor and does not interact with other microtubule motor proteins tested. Furthermore, HR22C16 along with its analogs, inhibit cell survival in both Taxol-sensitive and -resistant ovarian cancer cells with at least 15-fold greater efficacy than monastrol, the first generation Eg5 inhibitor. Further analysis with HR22C16-A1, the most potent HR22C16 analog, showed that it retains efficacy in PgP-overexpressing cells, suggesting that it is not a PgP substrate. We further show that HR22C16-A1 induces cell death following mitotic arrest via the intrinsic apoptotic pathway. Interestingly, the combination of HR22C16-A1 with Taxol results in an antagonistic antiproliferative and antimitotic effect, possibly due to the abrogation of Taxol-induced mitotic spindles by HR22C16-A1. Taken together, our results show that Eg5 inhibitors have promising anticancer activity and can be potentially used to overcome Taxol resistance in the clinical setting.